Day 19: The Swartberg & The Gamkaskloof 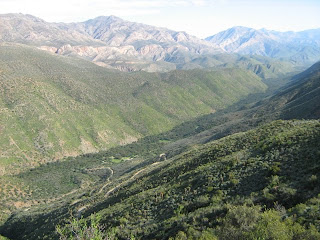 Today was one of those mountain days again - 60 km's or there abouts. After a good 4 hour nights sleep & a hearty breakfast we left Prince Albert & almost immediately started winding up the 4 odd km Swartberg Pass ! 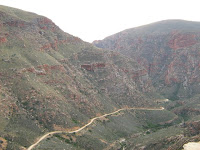 Steep long climbs & equally hair raising decents were the order of the day with the most dramatic being the plummet into Die Hell !!! 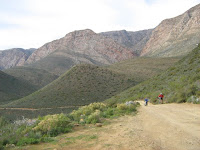 However before reaching 'heartbreak hill' the now well rested race winner Tim James, his wife Michelle & young son Murray passed us in their van going up the pass.

They wanted to catch Fiona & Doug before they dropped into 'Die Hell' proper with an offer of refreshmments & promised to return.
And return they did. What a gesture that was - Hot milo, biscuits, sweets, cokes & a ton of encouragement from the doyen of the Freedom Challenge, Tim himself. It made our day ! Thank you. 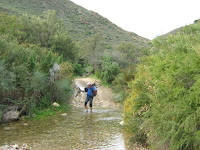 We had decided to make this stage a rest day so we took it easy and are staying in the Gamkaskloof valley with Cape Nature after arriving @ around 14:00pm.
We need the rest after only having 8-10 hours sleep in the last two days. Marionette & Piet who run the private kiosk/eatery down here gave us a fantastic lunch & sorted out our 2l boxes. They also brought us a great dinner & got the wood burning stove going for warmth. Thank you guys, we appreciate the effort. The pics attached should give an idea of where we have been today. You may be able to see the road winding away into the distance up the middle of the two ranges. 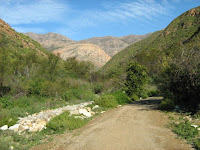 The Gamkaskloof is extremely dramatic & quite tiring to ride after having completed well over 1500km's of our race already. There's more to come however !
Also after a 'leave' of absence, some major bike problems & a time penalty Sean is back with the group again.
Posted by Gadget at 4:50 PM