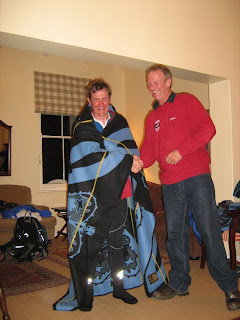 Stettynskloof was a lesson in humility. Brute strength & bluster just didn't do it today. We left Trouthaven with more than a little trepidation today @ around 06:00am headed for the infamous Stettynskloof portage. 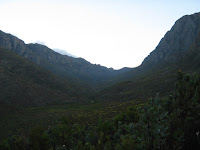 And what a portage it was - All 8 km to the head of the valley where we had to climb out of the valley and decend the other side to find a jeep track. We found the footpath at the dam wall at around 8am and headed up the valley just as it was getting lighter. The valley is hemmed in on either side by massively imposing Cape mountains. There are two valleys heading away from the dam so one must make bloody sure you get it right.
Right from the onset our bikes were being snagged by the bush closing in around the footpath. Every now and then our clothes would also be snagged, almost as if Stettynskloof was trying to tell us something ! Little did we know that this was just the begining of an epic day. 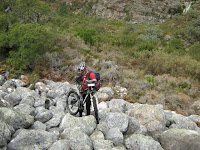 There are also numerous little streams coming in off the mountains and running into the main stream, which after a few days of heavy rain would be unnavigable or crossable. We made steady dogged progress crisscrossing from the eastern side to the western side of the main stream numerous times to get past the sheer cliffs and dropoffs along the way.
We did great (Had'nt completely lost our sense of humour yet !) until we crossed the river for the umteenth time & headed up the scree field (it's a whopping bloody boulder field !) , the wrong way. We should have crossed over to the left hand side & then headed into & up the fast flowing stream for 20 odd meters before exiting to push up the slope. Well we did'nt and Sean succumed to my concern that the narrative said to go up to the right where would miraculously find a path heading out of the side valley and back onto the main track. 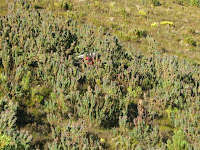 The mistake cost us more than an hour & a massive amount of wasted energy. We bashed 100m up that side before I finally listened to Sean and headed back down to the boulder field. We had fallen into huge holes, slipped off the edge of the mountainside and cut and bruised ourselves no end ! Our bikes also did'nt escape with bent and dinged frame & components.
Having eventually negotitaed our way past the boulder field we were met with the remainder of the valley which from where we were standing looked relatively ok despite the lack of another path - yeah right !!! The grass is long, the bush bloody thick and the terrain hides numerous rocks, pot holes, donga's and every manner of obstruction known to man. 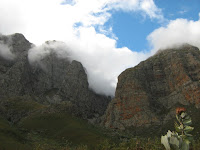 The mountains came alive with both Sean and my shouts of frustration and indignation that Dave W could make us do this so close to the end. He was'nt our friend anymore - if those mountains could talk......! The valley echoed with our cursing time and again as we struggled up to the protea field. See if you can spot Sean in the protea's in the accompanying pic !!! Yes they're beautiful but they are also your nemises as you head up the valley.
We had to negotiate these things to cross the stream one last time before we were faced with a massively daunting climb out of the valley into the next one to the jeep track. The climb out took us more than an hour and an incredible amount of perserverance and willpower. It's not a joke and no one I know or have spoken to has ever enjoyed Stettynskloof. 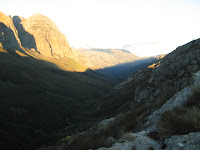 It must be said that it evokes all manner of awe inspring feelings within you because of its absolute rugged beauty and when you crane your neck to look up at the imposing mountains towering high up above you on either side of the valley you finally begin to realise your place in the universe.
We finally got to the head of the head of the valley @ around 17:30pm and managed to pick up the farm track over on the other side just as it was getting dark. We headed out the next valley (12km's) towards the foot of the Dutoitskloof. 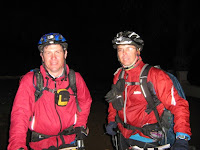 From there it was an 11km climb to the top of Dutoitskloof pass where we were met by Dave Wadilove & Fiona. We got a quick run through of the route into Diemersfontein. Sean & I made it to the finish @ around 20:00pm, 23 days after we started !