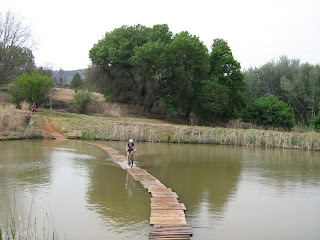 So there we were at 6am on a bleak rainy Saturday morning on our way to Teak Place and back home for what I had pitched as a fun 60 odd km ride. I thought that it would be fun to ride from Broadacres to Teak Place in the Cradle of Mankind, do the 21km black route in Teak Place, have a super sized Teaks rock shandy or two and then return home to Broadacres for a lunch thingy.
The idea was sound, Fiona would assist with the route and of course the idea was readily accepted. Also since it was only going to be about 60 km's most of the group felt that after our Freedom Challenge layoff that it was do-able enough for a bit of fun.
So Fiona, Doug, myself and Carine headed off from home, met Malcom at Broadacres and then set off together to Teak Place. We rode via Lanseria and across country towards the top end of Beyers Naude to collect Chris who would join us from the Krugersdorp side. 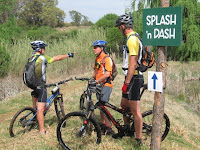 Despite not discussing a meeting time with Chris and despite us having an interesting navigational discussion via cellphone about which of two 5km distant communication towers on the horizon he should head towards we finally met up along the way.

With all the development taking place out towards the Cradle it is becoming increasingly difficult to find suitable single track routes to our chosen destinations these days. Nonetheless Fiona has a natural built in GPS, uses google earth aplenty and has a fantastic memory of past rides across the veld out towards the Magaliesberg. We found our way to Teak Place across country well enough even though we had to negotiate a very securely locked farm gate along the way. 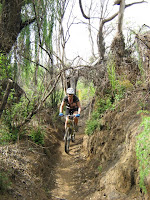 It was all going quite well until someone commented that their odometer was already registering 35km at Teak Places gate ! That meant that if we did the 21km route at Teak Place plus the 35km back home that our 60km fun ride would end up being about 91km - O crap !!! The distance is not the issue but rather that our minds had been prepared for 60km's, that the weather had cleared up and the temperature was soaring ever upwards towards 30 deg's. Also Teak Place's black route has a few stiff lung busting hills so the fun prospects were deteriorating rapidly. 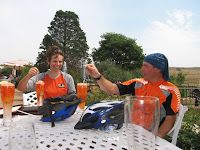 So after being taken apart for conning them about the distance we hastily made alternate plans for riding only the fun bits inside Teak Place, opting instead for an early rock shandy. Well my troubles didn't end there. I had quoted a mere R18 for a super sized rock shandy in the planning mail when in fact the things cost R28 each ! Strike two !!!
Strike three was the fact that Teak Place was the perfect after ride chill out place and not a good idea for a mid ride stop because it was too easy to get lazy under those large shady umbrellas sipping those super sized rock shandies and watching all that delicious food floating past !!! They've even got beds to park off on under the trees for a nap ! I'd cooked my goose properly by then and they aren't going to let me forget it either....
PS: After taking a shortcut at Teak Place and another shortcut to get home we ended the day at 13:30pm on 85km. So what's a few km's between friends ?
Posted by Gadget at 11:25 AM