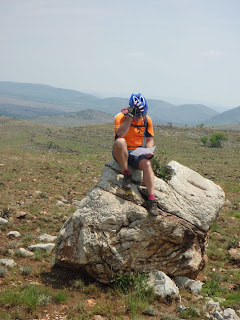 Getting lost has its own adventurous charm especially when you have the time and are out and about on your mtb bike with your mates. The trouble is that life is far too rushed and more often than not too full of everything else to enjoy getting lost in the veld on a beautiful spring day. Besides these days you may also get a load of buckshot up your portal for trespassing.....

I have often wondered what it must have been like for those explorers of old to set out into the complete unknown with nothing more than a half a map, a creaky wooden sail boat, a bunch of irritable deck hands and a crap load of ocean between them, their goal and the hereafter. I guess the closest I've come was when a group of us got stuck in the bottom of a serious valley near Vuvu in the Drakensberg after dark. Our map, the compass and the light did nothing to alleviate that feeling of 'inevitableness'.

I realised then that all that stands between you and the hereafter is your state of mind and the degree to which you came prepared. Being able to pull yourself towards yourself rates more highly than being prepared though because more often than not taking a moment to sort through your thoughts amid the bull dust going on around you opens up possibilities that may not have been evident before.

So it was with all this in mind that I was about to lead my companions for the day across 95km of 'Guateng wonderland' for a morning's ride that I had only done once previously without paying to much attention to where we were going. I had got a set of instructions from Fiona and was confident as always that we would have fun knowing that there was a cheese shop along the way for a coke and some grub.

Did we have fun & make it back ? Yes we did and mostly because Malcolm who originally developed the route led the way (he was a late addition to our group). We got to see more and had a richer experience with his guidance - thanks Malcolm.
Did we stop at the cheese shop ? No we didn't because we opted to try a different longer route which excluded the cheese shop but included a Spaza shop.
Did we go hungry and thirsty ? No we didn't because we were well prepared with food & hydration for a long ride on a hot spring day.
Would we have made it back if Malcolm had not joined us ? Of course, Fiona's directions were spot on except for the detours we decided to take on Malcolm advice.

All in all a great day out and even though we had deadlines, not so rushed that it wasn't fun. After all why do we ride if not for a bit of fun with our mates.
Posted by Gadget at 12:19 PM