From Lardbottom to The Freedom Challenge 2009

'Lardbottom' - Wikipedia doesn't have a description for this one yet, probably because it's uniquely peculiar to the good old days of slang in the sunny KZN. Well for the unknowing out there and for those unfortunate souls who still fall into the general category, a 'Lardbottom' is defined as follows:
"Lardbottom - an extra large rotund person with an equally extra large rotund rear end, usually brought about through an abnormally high intake of seemingly nutritious junk foods, winter dinners and copious quantities of red wine which is instantaneously converted to lard (fat) and deposited in the glutemus maximus".
So there I was a short 10 months ago now, all 100kg's of me doing the weekend warrior thingy at Northern Farms and feeling mighty proud about only walking up the rolling sandy incline from the rivers end twice a month ! Shocking I know. In those days I felt a bit like a great dane trying desperately to assert my bark only to find that I had no compression at the fhincter ! The polite version is that a very red faced lardbottom had to walk for lack of oxygen which made me feel decidely light headed.
Anyway my good mate Dave (aka ''The Monk' so named by our very own 'Queen Bee') tells me one day that he has entered the Ride to Rhodes which is basically the 550 km adventure ride version of the Freedom Challenge from PMB to Rhodes in the E-Cape. 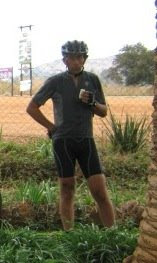 Of course he's built like a grey hound and is as fit as a fiddle to boot, so with a bit of extra miles in the legs it'd be no problem for him. I loved the idea but weighed more than him, his bike, his pack, his poodle and his 4x4's spare wheel together. So of course the problem was how to get to the point where he would'nt leave me on the first day in the middle of the Drakensberg wondering which kraal I was going to bed down in for the night. The scenario did arise in our discussions and being the good buddy that he is he made damn sure I understood that he was going to finish come hell or high water i.e. with or without me.
So being mindful of our longstanding 27 year friendship I made the decision to start training, a rather foreign concept on a MTB for me. I also developed a basic Excel based training log, along with showing him my bike computer to record and prove (yes I know you can attach an electric drill to a static trainer to clock miles on your MTB !) that I was making a concerted effort for our upcoming adventure. Despite a bad bout of flu I progressed well and he was satisfied that I was coming along nicley even though I was still several miles behind him up Breedts Nek. The homemade pies at the bakery at the end of the ride was still a source of some concern to him though. Nonetheless I was poised to go to Rhodes until he went to Mozambique for 10 days and I attended the JHB race briefing and met Queen Bee & Co who did the Rhodes ride last year !

Well now, I was invited to a post race briefing 'scare session' at a pit stop on the way home by Queen Bee and subsequently with some trepidition accepted an invitation to go riding across the Cradle and around the dam along with another 3 days of riding to follow. Of course the whole group was doing the full Freedom Challenge (2300km of it) and having watched the DSTV footage of the race I felt decidely let down that I would be stopping at Rhodes whilst this great bunch would be continuing on to Paarl. So after expressing my thoughts to the group a few weeks later, realising that I actually was'nt that unfit anymore and with very little persuasion from my new friends I changed my race entry to the Freedom Challenge with the provisor that I stay in my starting group so I could still ride with The Monk to Rhodes !
Well in case you lot out there are wondering, ol' lardbottom aka Gadget (I apparently have a penchant for MTB related gadetry) (http://dash4freedom.blogspot.com/2009/05/whats-in-name-plenty.html) now weighs 79kg's and counting and I am doing around 15 hours of solid training a week. I just can't stop talking about food, much to the amusement of my new found friends - Just ask Badger about the Sani2C nonstop race !!! And yes the Freedom Challenge does have the ability to change your life, in more ways than you might realise...
Posted by Gadget at 3:36 AM