The Horns of Dilemma

Well, with a leaking geyser & water pipes, a bloody sore vitamin B shot, hairline cracked stem mountings, a thoroughly seized crank set and a half inch gash in the head to boot, it's been a great day. All that headlining about seizing the day and giving it horns has come home to roost - I think I got skewered on the horns of dilemma today...! 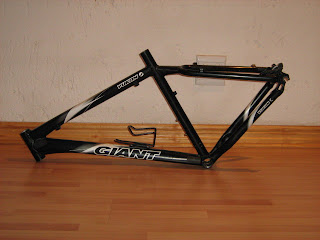 I guess some it is my own fault. I should be dedicating my time to packing those 2L boxes before Thursday with the final maps, narratives and other intermediate things like lubes, the chain, batteries and the like. Instead I have spent time stripping down the bike for a major service & rebuild, so I can sort out any issues arising from all the new components etc.
As you can see I was successful in the end, well at least to the extent that the frame is now bare of all but the water carrier - don't ask. It's a bit nerve racking to see how many dings, scratches, scrapes and knocks this frame has taken over time and I caught my breath more than once over what at first appeared to be significant frame damage.
None the less it'll still get a thorough going over once it's degreased and cleaned just to make sure. I'd hate to have to abort because of a cracked frame or worse. It's happened before but that fellow managed to finish with a rudimentary fix. I'd rather not tempt fate so I'll do my best to inspect every significant scratch with a magnifying glass.
It took less than an hour to strip all the parts except for the crank set which needs a crank puller to remove the arms and a splined BB tool to remove the BB. And that's just where the k.. hit the fan. It is a simple exercise to remove these items or at least should be. 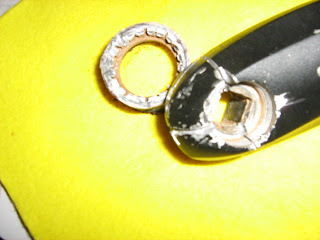 The damn cranks were seized onto the BB shaft so tightly that the crank arms threads stripped after tightening the bolt to remove them - both sides ! This rendered the crank tool useless.

Using Q20 to penetrate and loosen them didn't work either. Eventually I bought and used an automotive bearing puller and after some serious effort the chain ring side came loose. The BB doesn't disassemble from this end so I was still stuck.

The other side didn't budge at all and after one particularly strenuous effort the frame slipped out of my grasp and hit me on the forehead leaving me with a bloody gash ! The net result of all this ? #$$$%%^&))+_)#@$%^&*()_ !!!!!!!!!!!!!
The only other solution that I could see was to use a hacksaw (very very very carefully) to cut into the crank arm to loosen its clamping effect on the BB shaft. I had to stop cutting eventually because there's no space around the BB and the frame is millimeters away. After another herculean effort with the bearing puller the crank arm finally came away and I could remove the mashed BB cup.
That's where the whole lot has been left for another day. I'm 'gatvol', but have at least regained some of my composure after making a cuppa and tucking into some of ma's fruitcake.
Posted by Gadget at 7:55 AM