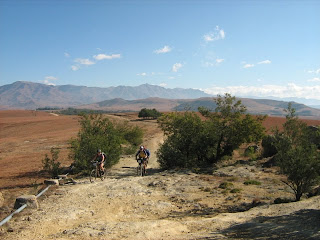 Another long day today, but certainly one with the most dramatic scenery. We are truly riding in Gods country today. We left in the dark at around 05:30am in heavy mist & traveled along a mountain ridge & eventually joined a district road. 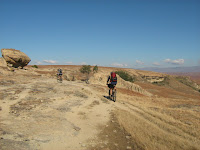 We left the road after climbing a few km's to do the Black Fountain route. First down a mountain to cross a river & then up & around a few more ridges on the other side. These are 'Drakensberg' type mountains, so they are monsterous. We traversed the top & then headed down to the Tinana Mission on the other side - about 20km's of stunning mountain riding ! We were up at about 1700m for most of it.
The last single track of the day took a long time with lots of navigation challenges. We again headed off the road into the mountains along cattle paths crossing 2 rivers several times for about 13km's whilst heading up a network of valleys. 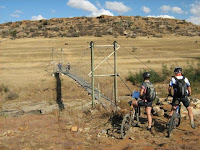 It was tough going because in places the thatching grass was several feet tall or we had to cross semi plowed rural mielie fields next to the rivers.

Anyway it got dark when we were still several km's & right at the bottom of the river valley from Vuvu village where we're stayng tonight. 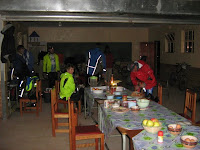 We climbed up a cliff to get a road that would take us to a cell mast right at the top of the mountain. It took us about 2 hours to get from the river where it got dark to the top and we got into Vuvu @ around 19:30pm.

It was a fantastic day of riding and tonight we are being put up by the villagers of Vuvu. Elainne has given up her accommodation so Sean & I have somewhere to sleep. As I said yesterday 'Mama Africa' will look after me...
Posted by Gadget at 8:40 AM